In July of 1883 the families of Abraham Nisly and Christian Bontrager left Illinois and headed for Nebraska seeking bountiful farmland. They were unable to complete their trip due to flooding, but an eager railroad land agent told them of good, inexpensive land in Kansas. On July 25, 1883, the families got off at the last stop on the Santa Fe line, in Hutchinson, Kansas.

Word soon got back to Illinois that the Kansas settlers were doing well, and more Amish farmers headed west. Today, more than 100 years later the descendants of these Amish families still live in Reno County. Following their religious customs, many of the men still wear beards and the women white caps. Little else is the same.

In the late 1940s and 1950s the descendants of these families began opening businesses along Hwy. 50 near Hutchinson. In 1949, Tobe Stutzman opened a cabinet shop. Several years later, his brother Ervin, took over the business and began making truck bodies and storm windows. The storm window business soon became what is now Pleasantview Home Improvement. Today there are 15 businesses, a school, and a voluntary fire station in Pleasantview.

How Pleasantview Got Its Name

In the early 70’s, the community decided it was time to have a name. So we had a contest and invited the people that lived in the community to help us find a name. After many hours of discussion, the final vote was “Pleasantview”. 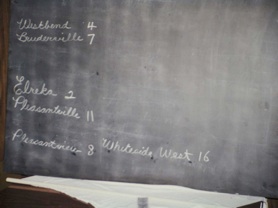 Above:    Votes for a community name.
(For more photos, click on the photo.)